The City of Calimesa has been identified as one of the fastest growing cities within the Riverside County and Southern California region. As the city experiences new growth our goal is to provide the very best professional fire protection with a core of dedicated professionals.

Our service area is geographically located in the gateway to the San Gorgonio Pass at the base of the San Bernardino National Forest and includes open areas which include wildland urban interface/intermix. The city is bisected by the Interstate – 10 corridor and has significant Critical infrastructure including Railway and Electrical Distribution services.

As Fire Department services continue to evolve, the Fire Executive team is committed and focused to the development of Fire Prevention, Suppression and Emergency Medical / Rescue, programs and services which are sustainable and reliable, through the concepts of Community Risk Reduction, Standards of Coverage, and the application of cutting-edge industry recognized best practices which also reflect long term fiscal responsibility.

As your City of Calimesa Fire Chief, I am privileged and honored to lead with Integrity, Courage, Honor and Commitment, as I serve you and the citizens of the community. 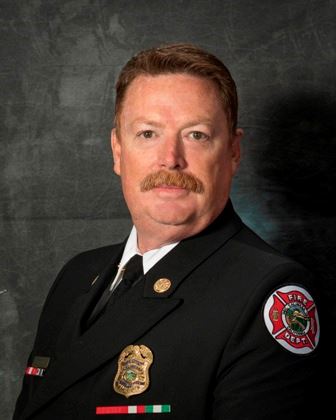 Chief O’Connell began his Public Safety Service career in 1982 with the Big Bear City Fire Department and is a Veteran of the United States Marine Corps. Chief O’Connell transitioned to Law Enforcement in 1991 and served in various investigative assignments including 17 years in Specialized Enforcement- S.W.A.T. He served as the Director for the Frank Bland Regional Training Center. Chief O’Connell returned to the fire service in 2015 and was hired as a Fire Captain with the City of Calimesa in 2018, promoted to Battalion Chief in 2019, and was appointed as Fire Chief in 2022. Chief O’Connell holds a Master’s Degree in Public Administration. A Bachelor of Arts in Criminal Justice Management. Chief O’Connell holds several professional certifications including a California P.O.S.T. Management Certificate, California State Fire Marshals Chief Fire Officers Certificate and is a graduate of the Sherman Block Supervisory Leadership Institute. Chief O’Connell has been the recipient of two (2) Medals of Valor and a Medal for Lifesaving.